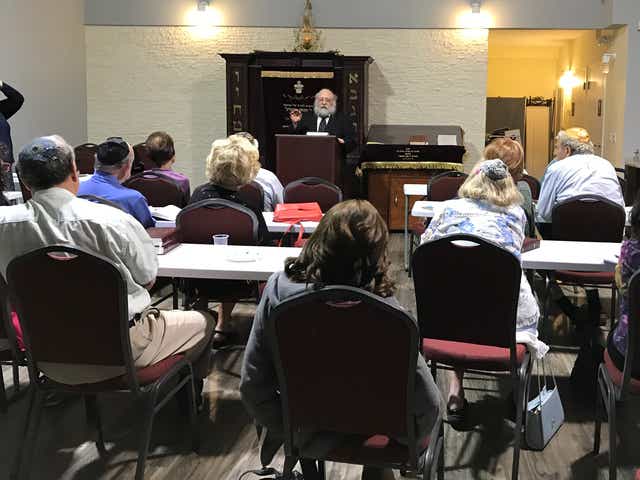 Lea Greenberg, of Buffalo, New York, mother of Bonita Springs Rabbi Mendy Greenberg, was sitting in the lobby of a Jupiter, Florida, hotel for a family member’s bar mitzvah when she glanced at a TV and saw the news.

Much like the rest of the Orthodox Jewish community, she learned of the Pittsburgh Tree of Life shooting that took 11 lives hours after it happened.

“We don’t use any electronics on the Sabbath,” she said.

Her husband, Rabbi Heschel Greenberg, who was also visiting from Buffalo, led a service at the Chabad of Bonita Springs on Monday night. About 20 people joined in solidarity as Greenberg spread his message of kindness in response to the tragedy.

The attack, he said, was an attack not only on the Tree of Life Congregation but on all the Jews in the world and an attack on the United States and it’s freedom of religion.

While it is understandable to react with shock and silence, Greenberg insisted that was the first step after tragedy strikes. Next he said, comes anger. Though he admits anger is an ugly trait, he calls this “Kosher anger.”

Greenberg continued to spread his message by insisting that after grief, the Jewish community should move forward with joy and more intense kindness.

Greenberg generated a few gasps in the room when he said he does not tolerate people.

“You tolerate a root canal and a colonoscopy,” he said. “You don’t tolerate people; you embrace them, even if they have different views.”

Greenberg’s son, Rabbi Mendy Greenberg, said that though the community is shaken up about the tragedy, he has received an immeasurable amount of support from the area expressing sympathy and concern.

“I have always felt welcomed in this community, he said.”